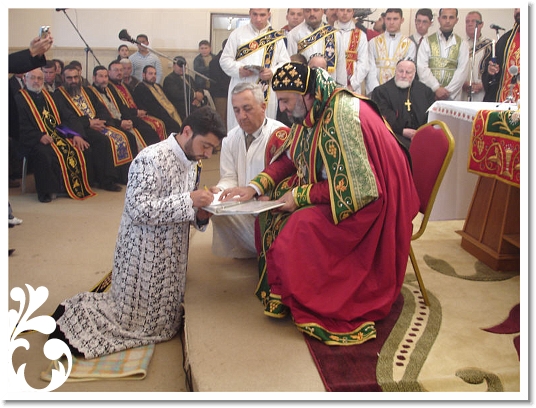 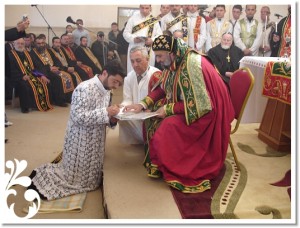 February the third, 2008 was a great day in the life of Rev. Deacon Alan Alshaltan. His Eminence Mor Cyril Aphrem Karim, Archbishop of the Archdiocese for the Eastern United States, ordained him to the honorable rank of the priesthood. The ordination took place at St. Eliyah Church of Enkawa, Iraq.

Present at this celebration were many honorable dignitaries of the clergy in the Churches of Iraq, among them:
Mor Gregory Saliba, Archbishop of the Archdiocese of Mosul, Mor Timothy Mousa Alshamani, Archbishop of the Archdiocese of Mor Matti, Mor Severius Ishaq Saka, Patriarchal Vicar for Higher Syriac Studies and Mor Rabban the Bishop of the Amadia Diocese of our sister Church of the Chaldeans. Also present at this sacred occasion was a big crowd of priests and the faithful of Enkawa, Bartilleh- his hometown-and its neighboring cities to share the Deacon’s family their joy. Rev. Deacon Alan Alshaltan was ordained to the holy priesthood under the name of Father Mattias, and he will be serving the parish of St. Ephraim in Central Falls, Rhode Island, U.S.A. After. Father Mattias Alkhoury Sleiman delivered a speech, thanking his Eminence Mor Cyril Aphrem Karim for his efforts and concern, and he expressed his gratitude for the blessings he received by the presence of all the honorable Archbishops, who took the time to be there for him with many attendees and the congregation.

All the clergy and parishioners of the Syriac Orthodox Churches of the Archdiocese of the Eastern United States, wish Father Mattias Alkhoury Sleiman success in his endeavors in his future parish, asking our Lord Jesus Christ to bless him and his family, and give him strength, patience and wisdom to serve his Church and its people faithfully.