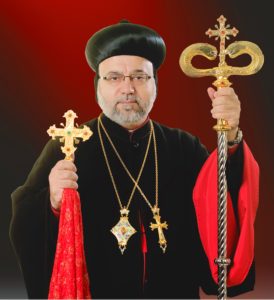 Archdiocese of the Syriac Orthodox Church for the Eastern USA

Born in Damascus, Syria, on May 27, 1966, His Eminence Mor Dionysius John Kawak is the son of Aziz and Adele Kawak and the brother of Dr. Abboud, Souad, Said and Faheem.   His Eminence began his professional studies in 1984 at the University of Damascus, School of Economics with a focus on economic studies.  In 1987, he entered St. Ephrem the Syriac Theological Seminary in Damascus, Syria. On December 24, 1989, in St. George’s Cathedral in Damascus, the Lord called His Eminence to the monastic profession in the Holy Church.

After graduating from the seminary in 1990 with a degree in theological studies, His Eminence was chosen by the late Patriarch Ignatius Zakka I Iwas (+2014) to continue his studies at the prestigious Pontifical Oriental Institute in Rome, where he became fluent in Italian. His Eminence also spent time at St. Ephrem Monastery in the Netherlands with the late Archbishop Mor Yulius Issa Cicek (+2005). During that time, His Eminence John Kawak, as a young monk, spent additional time studying the works of our forefathers. In 1993, His Eminence graduated with honors from the Pontifical Oriental Institute with a Masters in Eastern and Oriental Liturgics. He completed his Master’s thesis in Italian on “The Holy Virgin Mary in the Book of the Common Prayer (Shhimo)” of the Syriac Orthodox Church.

Elevated to the priesthood: Upon returning to Syria to confirm his faith in the Holy Church, His Eminence was ordained to the rank of Priest on July 10, 1994.

From 1995-2015, His Eminence was given pastoral responsibilities as a spiritual adviser to the Patriarchal Center for Christian Education in Damascus, Syria, and as Director of the Patriarchal Choir at St. Ephrem the Syriac in Damascus. And from 1996 to 2006, His Eminence assisted in the education of seminarians at St. Ephrem the Syriac Theological Seminary in Ma’arat Saydnaya as a professor in Syriac liturgy and liturgical theology. From 2005-2006, he also served as the parish priest for St. Mary’s church in Saydnaya.

Service in the U.S.: In 2006, Mor Cyril Aphrem Karim, Archbishop of the Syriac Orthodox Church for the Eastern United States (now His Holiness, Patriarch Mor Ignatius Aphrem II) asked Late Patriarch Mor Ignatius Zakka I if His Eminence John, then a monk-priest, could serve in the United States. With the blessings of the Patriarch, His Eminence traveled to the United States to serve the parish of St. Aphraim in Washington, D.C., from 2006 to 2008. While in charge of St. Aphraim church, he also served the newly established parish of St. Philoxenus of Mabug in Roanoke, Virginia while simultaneously traveling to Indiana to serve St. Helen church.

From 2008 through 2015, His Eminence also served as Director of the Patriarchal Office of the Syriac Orthodox Patriarchate in Damascus.

As of October 2018, His Eminence had established two new parishes – the Mission Parish of St. Jacob of Serugh in North Carolina and St. Matthew the Hermit in Michigan − to tend to the spiritual needs of the growing population of Syriac Orthodox Christians in the United States.

Close to His Eminence’s heart are the Church’s youth to which His Eminence has been dedicated from the beginning of his ministry.

Ecumenical Commitment: Over the years His Eminence has also dedicated himself to ecumenical dialogue and has served as:

His Eminence is fluent in Syriac, Italian, Arabic and English and has a good command of the French language.