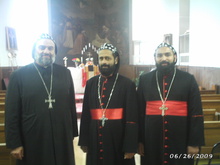 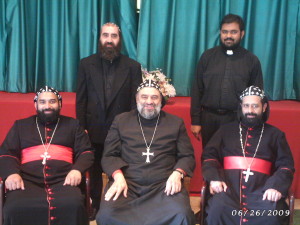 On Friday 26th of July, His Eminence Mor Cyril Aphrem Karim received their Eminences Mor Severios Kuriakose, Chief Metropolitan and Mor Selvanos Ayoub, Assistant Metropolitan of the Knanaya Archdiocese of our Syriac Orthodox Church of Antioch. They were accompanied by Rev. Fr. Jacob of St. Peter’s Knanaya Syrian Church in Yonkers, NY. During the visit several issues were discussed concerning the presence and witness of our Church in North America.

After a short time at the reception hall, the guests were invited to a fasting lunch. Following lunch, they were given a tour of the new Archdiocesan Center in Midland Avenue, Paramus, NJ. They were very impressed by it and praised the generosity and loyalty of our Syriac people.

The Knanaya Archdiocese of our Church in India was established in 1910 in order to serve the spiritual needs of our Knanaya community which encompasses the descendants of some 72 families who migrated to India from Edessa (Urhoy) in AD 345 led by Bishop Mor Youseph and Knai Thoma. Since the fourth century the Knanaya Community continue to preserve their customs and traditions, as well as, their special relationship with the Syrian Orthodox Patriarchate of Antioch. 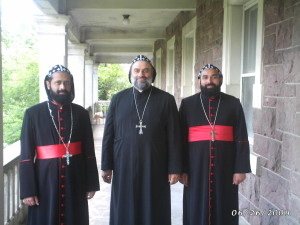