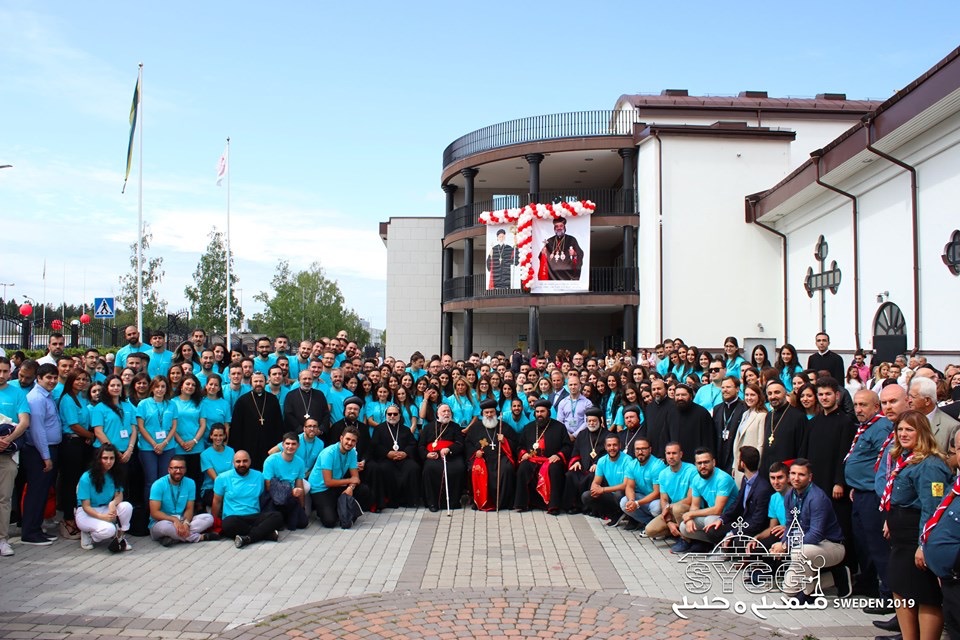 The Suryoyo Youth Global Gathering (SYGG 2019) was held in Sweden from July 30 till August 5, 2019. This year’s theme was: “Rooted In Him”. Youth gathered in Sweden from all over the world (among them 9 participants were from our beloved archdiocese) to encounter Jesus and live the fullness of the Christian faith as well enjoying outdoor social activities. On Friday August His Eminence Mor Dionysius John Kawak gave a spiritual lecture about “On Body in Christ”, followed by short presentation given by Jessica Hanna about our Youth Mission Trip to Guatemala last June. On August 4, 2019, His Holiness Patriarch Mor Ignatius Aphrem II celebrated the Holy Qurobo at Mor Jacob of Nisibi Cathedral in Södertälje, Sweden, for the occasion of the feast of Transfiguration as well as the conclusion of the fifth Suryoyo Youth Global Gathering. He was assisted by their Eminences: Mor Julius Abdelahad Shabo, Archbishop of Sweden and Scandinavia, Mor Dioscoros Benjamin Atas, Patriarchal Vicar in Sweden, Mor Timotheos Moussa Al-Shamani, Archbishop of the Archdiocese of Mor Mattai Monastery, Mor Dionysius John Kawak, Patriarchal Vicar for the Archdiocese of the Eastern United States of America, Mor Nicodemus Daoud Sharaf, Archbishop of Mosul, Kirkuk, Kurdistan and Environs, and Mor Anthimos Jack Yakoub, Patriarchal Vicar for Youth Affairs and Christian Education. The reverend priests, deacons, and choir of the cathedral served the Qurobo, in the presence of the youth taking part in the SYGG, as well as a large crowd of faithful. In his sermon, His Holiness spoke about the significance of the feast of the Transfiguration of our Lord Jesus Christ. His Holiness, thanking the Lord for the success of the fifth SYGG, considered that this gathering puts the youth before the same question, and give them the chance to experience the personal relationship with the Lord Jesus and the living together with clergy and youth from the various Syriac Orthodox dioceses all over the world. During the Qurobo, His Eminence Mor Anthimos Jack Yakoub spoke about the main goals of the SYGG and ultimate vision of the gathering. He also thanked all those who took part in organizing and preparing for the SYGG in Sweden. Several youths then gave testimonies about their participation and experience in the past few days at the SYGG; the youth considered the gathering to be a life-changing experience that brought them closer to our Lord and with their spiritual fathers and leaders. After the Qurobo, a memorial photo for the gathering was taken.