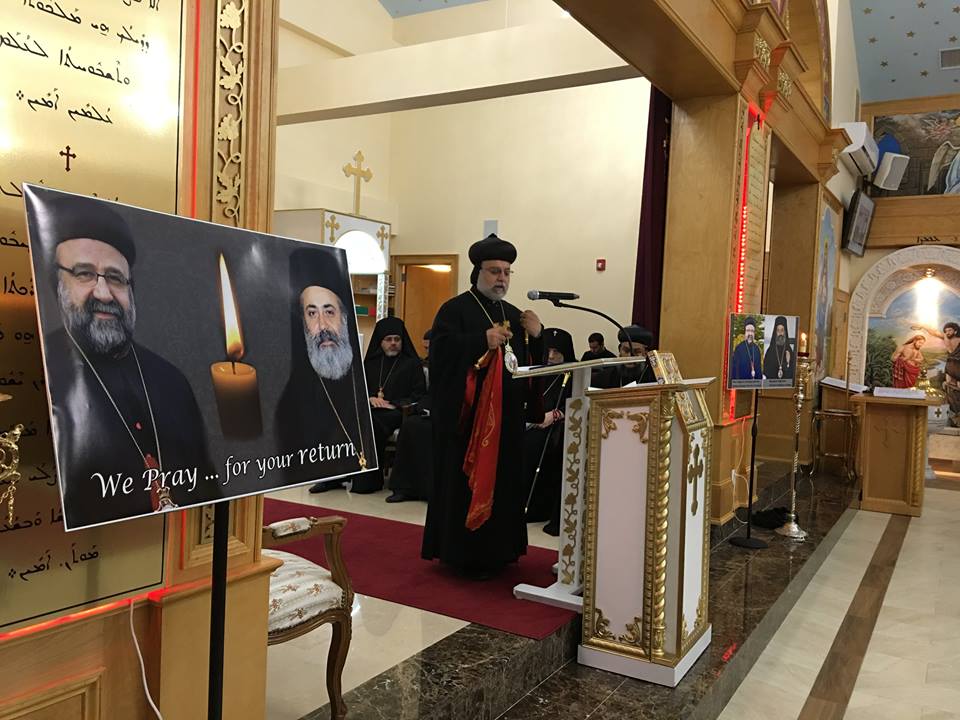 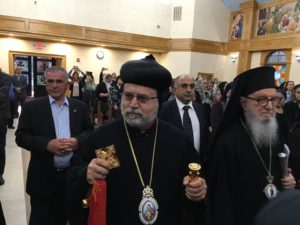 His Eminence Mor Dionysius Jean Kawak’s speech during ” the call to prayer for the safe return of the two kidnapped Archbishops of Aleppo.”

Your Eminences, Your Graces, Very Reverend and Reverend Fathers, brothers and sisters in our Lord Jesus Christ.
I wish first to convey the greetings and blessings of His Holiness Patriarch Mor Ignatius Aphrem II, Patriarch of the Syriac Orthodox Church of Antioch and All the East, who would have certainly wished to be in attendance tonight, were it not for his many burdens and responsibilities during these difficult times. Today His Holiness was joined by his brother Patriarch John X at the Balamand Monastery in Lebanon to pray for the safe return of our two archbishops.
I thank the Assembly of Canonical Orthodox Bishops of the United States of America and the Standing Conference of Oriental Orthodox Churches for organizing this important prayer service, as it represents the spirit of cooperation and engagement between these organizations. In addition, I extend my appreciation to Very Rev. Fr. Joseph Chamoun, Rev. Fr. Aziz Hadodo and all the clergy along with the Parish Council of St. Gabriel Syriac Orthodox Church for the use of this beautiful church and facilities.

We have gathered this evening at this solemn occasion in a common prayer for the safe return of Archbishops Gregorios Youhanna Ibrahim and Boulos Yazigi, who were abducted by terrorists 3 years ago just north of Aleppo, Syria, while on their way back from a mission to rescue two clergymen who also were abducted. Their kidnapping is an ugly manifestation of the extreme and radical ideology that has surrounded Syria and Iraq by groups like ISIS and similar terrorist organizations who claim to speak in the name of Islam. In enforcing their perverted interpretations of Islam, they mercilessly torture and murder their victims in horrific ways: beheading, stoning, imprisoning in cages and setting them afire, or simple execution. This religious extremism targets Christians and other religious minorities. Muslims are not spared from these atrocities if they do not adhere to this ideology: Sunnis are killed by Sunnis, and Shias are targeted by Islamist fanatics. These people do not represent Islam, rather the darkest sides of the human character: liars, murderers, torturers and rapists.
What we are seeing today in the Middle East is unfortunately not new in current history. We need to go back only a century to the genocide of at least 3 million Armenians and Syriac Christians during and after World War I. More recently, we witnessed the gas chambers of Europe, the ethnic cleansing in Africa, the events of 9-11, as well as the horrific acts in Paris last November, and in Brussels last month. What is happening today is nothing less than another genocide of catastrophic proportions. Christians have lived in Iraq and Syria from the dawn of Christianity. Yet now, under pressure from ISIS and like-minded groups, hundreds of thousands have been driven from their homes, had their properties stolen, their churches destroyed, and many of them now live in refugee camps.
At the beginning of the Syrian crisis, Christians were not specifically targeted for their religion. However, with the growth of fanatic Islamic groups, Christians are now being targeted and they are enduring more than their share of suffering and martyrdom. To give one example: Sadad is an exclusively Syriac Christian town of about fifteen thousand inhabitants. It was attacked by Al-Nusra Front and other groups about 2 and a half years ago. 45 people were killed in one day and among them 6 were from the same family, those 6 were brutally killed and thrown in a well. For the 1-year memorial of the massacre, I visited Sadad with His Holiness Patriarch Aphrem II, and I wondered how can we speak of peace after all those innocent people suffered and died simply because of their faith? How can we, as church leaders, instill hope in the hearts of the youth without divine help and power? How will their hearts open to the love and peace that Our Lord Jesus Christ taught us?
This brings me to Archbishop Gregorios Youhanna Ibrahim, about whom I wish to speak a few words. This is a man of God. He is a linguist, a towering intellect, an ecumenist and messenger of good will. He is an example of the Christian virtues of justice, tolerance, the dignity of human beings, inclusiveness and, above all, peace. As we join together in asking our Lord for their Eminences safe return, let us also pray for peace and a quick end to the enormous suffering taking place in the ancient lands of the Middle East, the birthplace of Christianity.
Lastly, I would like to thank you all for your participation in this prayer service, as we pray that our shepherds are quickly rejoined to their flock. Amen.