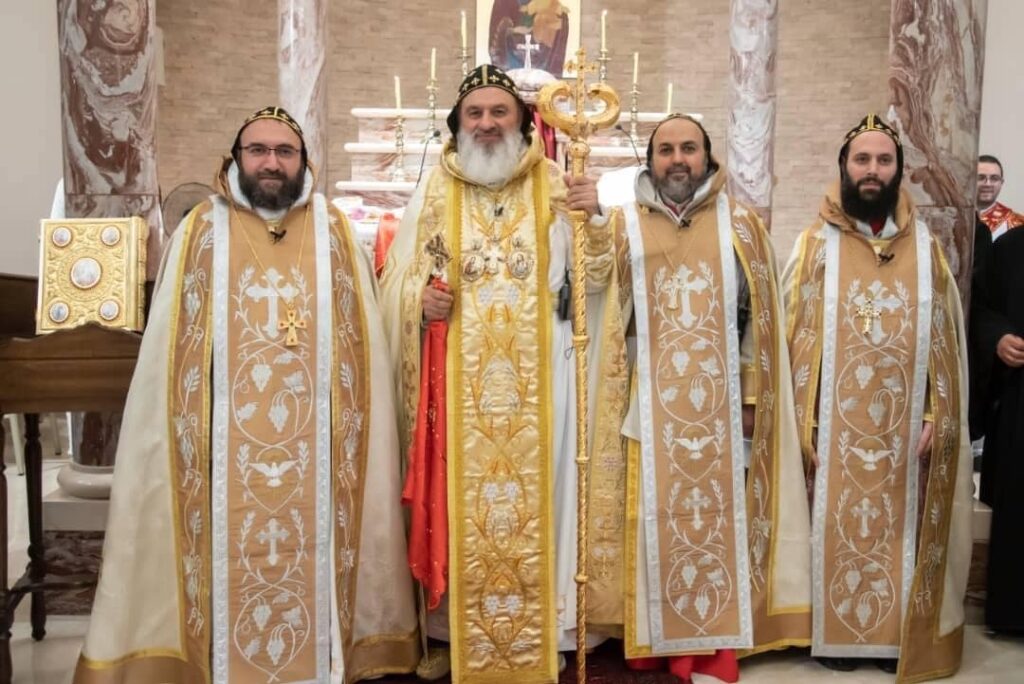 On June 25, 2021, His Holiness Patriarch Mor Ignatius Aphrem II celebrated the Holy Qurobo at the altar of the Virgin Mary Church in the Patriarchal Residence in Atchaneh, Lebanon.During the Qurobo, His Holiness consecrated Very Rev. Raban Roger-Youssef Akhrass as Archbishop, Patriarchal Vicar for Syriac Studies, Very Rev. Raban Cyril Babi as Archbishop, Patriarchal Vicar for the Patriarchal Archdiocese of Damascus, and Very Rev. Raban Joseph Bali, as Archbishop Patriarchal Secretary.His Holiness was assisted in the Qurobo by their Eminences: Mor Theophilus Georges Saliba, Archbishop of Mount Lebanon and Tripoli, Mor Nicolaos Matta Abdelahad, Patriarchal Vicar in Spain, Mor Philoxenus Mattias Nayis, Patriarchal Vicar in Germany, Mor Julius Hanna Aydin, Director of the Foreign Relations in Germany, Mor Polycarpus Augin Aydin, Patriarchal Vicar in Holland, Mor Dionysius Jean Kawak, Patriarchal Vicar for the Archdiocese of the Eastern United States of America, Mor Nicodemus Daoud Sharaf, Archbishop of Mosul, Kirkuk, Kurdistan and Environs, Mor Timotheos Matta Al-Khoury, Archbishop of Homs, Hama, Tartous and Environs, and Mor Yacoub Babawi, Patriarchal Vicar for Monks Affairs and the Administration of Mor Aphrem Theological Seminary in Maarat Saydnaya.Their Beatitude Mor Ignatius Joseph III Younan, Syriac Catholic Patriarch, and John X, Greek Orthodox Patriarch of Antioch attended the Qurobo and Consecration. His Grace Archbishop Shahe represented His Holiness Aram I, Catholicos of the Great of Cilicia for the Armenian Orthodox Church, and His Grace Antoine Bou Najem, Archbishop of Antelias for the Maronite Church, represented His Beatitude Cardinal Mar Bechara Boutros Al Rai, Patriarch of Antioch and All the East for the Maronite Church.Their Eminences Archbishops members of the Holy Synod of our Syriac Orthodox Church, as well as a number of other bishops, clergy, and crowds of faithful were also present in the consecration.During the Qurobo, according to the rite of the Syriac Orthodox Church of Antioch, the new archbishops declared their Orthodox Faith and signed it before His Holiness the Patriarch. His Holiness prayed the prayer of the invocation of the Holy Spirit and the laying on of the hand. He laid on his right hand on the head of Raban Roger, Raban Cyril, and Raban Joseph and ordained them as archbishops. Then, His Holiness gave the new archbishops the fatherly names (Mor Severius Roger, Mor Cyril, and Mor Joseph), and started to put on them the bishopric vestments. The new Archbishops sat on the bishopric chair; His Holiness placed his right hand over their shoulders and declared thrice: “Axios (worthy)”, while the crowd of faithful repeated the same each time. The new Archbishops were then carried on the chair to read the special reading from the Holy Bible. At the end, His Holiness gave them the crosier (pastoral staff).The new Archbishops gave sermons in which they thanked the Lord for the grace of their consecration. They spoke about their vocation and vision for their new ministry. Mor Severius Roger spoke about five talents inspired by the verse: “And to one he gave five talents, to another two, and to another one, to each according to his own ability” (Mt 25: 15). Mor Cyril spoke about the encouragement and consolation he finds in the verse: “In the world you will have tribulation; but be of good cheer, I have overcome the world.” Mor Joseph describe through the Pauline verse: “That good thing which was committed to you, keep by the Holy Spirit who dwells in us” (2 Tim 1: 14).Then, His Holiness Mor Ignatius Aphrem II thanked the Lord who elevated to the rank of the episcopate three new monks. He considered this day as “a historic day in the history of our Church in general, and especially in Lebanon. It is the first time for centuries that an Archbishop is ordained from Lebanon. Today, three Archbishops rather than only one.” His Holiness mentioned that the three new Archbishops originate from three great cities “which, by the providence and love of God, are represented today through these three Archbishops: Amid (Diyarbakır), Mardin, and Edessa.” He also thanked the parents of the archbishops and asked to the Lord to “accept your offering that it may be for the glorification of His name and the good of the Church.” “Today,” His Holiness added, “is a great celebration in our Church. We feel great joy and we thank the Lord God for His blessings.” His Holiness welcomed their Beatitudes the Patriarchs and asked from all the faithful to pray for the Christian Leaders in Lebanon in order to be able to contribute in finding solutions for the various crises in the country, especially that they will all meet in Rome this coming July.Afterwards, His Beatitude John X gave a short speech in which he said: “I assure Your Holiness that your celebration is ours. When I heard the Homologia, except for the part about the ecumenical councils, I felt as if I am declaring my faith as a Greek Orthodox.” He added: “Allow me, Your Holiness, to consider with you this day as a decision to relaunch the Joint Committee between our two Churches to continue its serious work and to increase its efforts to remove all remaining obstacles in face of our unity.” His Beatitude prayed so that “together, we may give common witness for our one Orthodox Faith to our Christian communities but also to the whole world.” He congratulated His Holiness, and the newly consecrated archbishops, and gave them a staffs as gifts.After the Qurobo, His Holiness our Patriarch, His Beatitude Mor Ignatius Joseph III Younan, their Eminences the Archbishops, and the three newly consecrated Archbishops entered the Church Hall where His Holiness put on the new archbishops the turban and the black robe with red hems and gave them the small staff. Congratulations were then offered to the new archbishops.