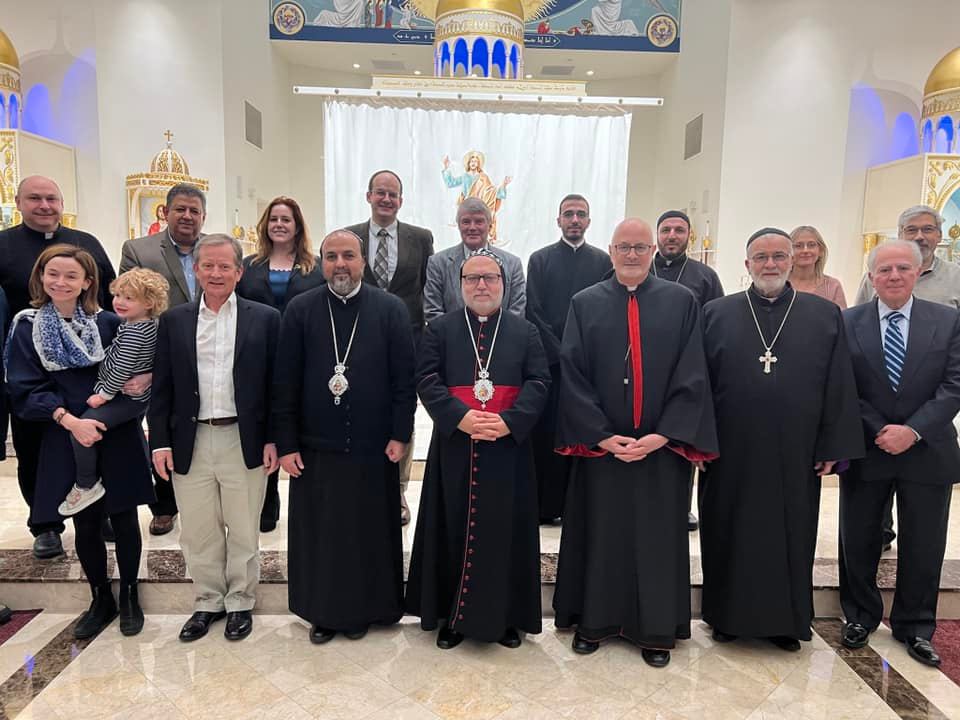 On Saturday, December 4, 2021, a Symposium commemorating the 15th Centenary of St. Jacob of Sarug’s death was held at the Mor Ephrem Center. The symposium was organized by the Department of Syriac Studies of the Syriac Orthodox Patriarchate, the Archdiocese of the Syriac Orthodox Church for the Eastern U.S., and Beth Mardutho: The Syriac Institute. H.E. John Kawak welcomed the symposium attendees. The rich conference program included speakers, Maria Doerfler (Yale University), Daniel McConaughy (Cal. State Northridge); Jeanne-Nicole Saint-Laurent Mello (Marquette University); Charbel Rizk (Padeborn University); Imad Syrany (Loyalo University Chicago); Phil Forness (Goethe Universitat); Youssef Tannous (University of Holy Spirit, Kaslik); H.E. Roger Akhrass (Syriac Orthodox Patriarchiate); and H.E. John Kawak. In addition to hosting the event at the Mor Aphrem Center, multiple attendees from other institutions participated in the conference via Zoom. The technical aspects of the hybrid conference were managed by Dayroyo Augeen Alkhouri Nimat. The speakers brought to light Jacob’s numerous writings from his homilies to festal letters and transmission and use of his writing within the Syriac liturgy. The wonderful poetic and prolific writing style of Mor Jacob was highlighted with a stimulating discussion of women’s choirs and Jacob’s portrayal. Speakers highlighted Jacob’s poetic style with the connections he makes to food being seen as a source of sin with the fruit from the forbidden tree to salvation with bread and communion. The evening concluded with a public lecture by Robert Kitchen on Jacob’s homily on the Whale. Jacob focuses on the Whale to talk about Jonah spending three days and three nights being a foreshadowing to Christ’s three days and three nights and his defeat of death without explicitly mentioning resurrection. Commemoration of Mor Jacob ended with the Sunday Holy Liturgy on December 5th, 2021, celebrated by His Eminence Mor Severios Roger Akhrass assisted by Very Rev. Fr. Augeen Alkhouri Nimat at St. Mark’s Cathedral. The sermon was delivered by Prof. Saint-Laurent Mellon where she highlighted the beauty of imagery of Jacob’s homilies and making connections between biblical passages from the old and New Testament in a manner that got many of parishioners excited to learn more about Mor Jacob and his writings that are not easily accessible to non-scholars.